What is the basis of classification of algae?

Algae are classified into three main classes – Chlorophyceae, Phaeophyceae, and Rhodophyceae. These divisions are based on the following factors:

(b) Form of stored food

(d) Number of flagella and position of insertion

Major pigments – Chlorophylls a and b

Major pigments – Chlorophylls a and c, and fucoxanthin

Major pigments – Chlorophylls a and d, and phycoerythrin

When and where does reduction division take place in the life cycle of a liverwort, a moss, a fern, a gymnosperm and an angiosperm?

Liverwort – In liverworts, the main plant-body is haploid (gametophytic). It bears the male and female sex organs which produce gametes. These gametes fuse to form a zygote. The zygote develops on the gametophytic plant-body to form a sporophyte. The sporophyte is differentiated into the foot, seta, and capsule. Many haploid spores are produced as a result of the reduction division taking place inside the capsule.

Fern – In ferns, the main plant-body is sporophytic. Its leaves are known as sporophylls and these bear the sporangia. Reduction division takes place in these sporangia, thereby producing many spores.

Angiosperm – In angiosperms, the main plant-body is sporophytic and bears flowers. The male sex organ in the flower is the stamen, while the female sex organ is the pistil. Reduction division takes place in the anthers of the stamen (producing haploid pollen grains) and in the ovary of the pistil (producing eggs).

Name three groups of plants that bear archegonia. Briefly describe the life cycle of any one of them.

Archegonium is the female sex organ that produces the female gamete or egg. It is present in the life cycles of bryophytes, pteridophytes, and gymnosperms.

Life cycle of a fern (Dryopteris)

Dryopteris is a common fern with pinnately-compound leaves. The main plant-body is sporophytic. Many sporangia are borne on the lower surfaces of its mature leaves. Each sporangium has spore mother cells which undergo meiosis to produce haploid spores. On maturing, these spores dehisce and germinate to give rise to a heart-shaped gametophyte called prothallus.

The prothallus bears the male and female sex organs called antheridia and archegonia respectively. The antheridia produce sperms that swim in water to reach the archegonia. The egg is produced by the archegonia. As a result of fertilisation, a zygote is formed. The zygote forms an embryo, which in turn develops into a new sporophyte. The young plant comes out of the archegonium of the parent gametophyte. 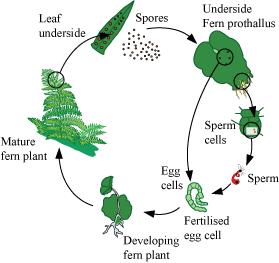 (a) Protonemal cell of a moss – Haploid

(b) Primary endosperm nucleus in a dicot – Triploid

(d) Prothallus of a fern – Haploid

(g) Ovum of a liverwort – Haploid

(h) Zygote of a fern – Diploid

Write a note on economic importance of algae and gymnosperms.

Algae have diverse economic uses. They perform half of the total carbon dioxide-fixation on earth by photosynthesis, acting as the primary producers in aquatic habitats.

(a) Food source: Many species of marine algae such as Porphyra, Sargassum, and Laminaria are edible. Chlorella and Spirulina are rich in proteins. Thus, they are used as food supplements.

(c) Medicines: Many red algae such as Corallina are used in treating worm infections.

(a) Construction purposes: Many conifers such as pine, cedar, etc., are sources of the soft wood used in construction and packing.

(b) Medicinal uses: An anticancer drug Taxol is obtained from Taxus. Many species of Ephedra produce ephedrine, which can be used in the treatment of asthma and bronchitis.

(c) Food source: The seeds of Pinus gerardiana (known as chilgoza) are edible.

(d) Source of resins: Resins are used commercially for manufacturing sealing waxes and water-proof paints. A type of resin known as turpentine is obtained from various species of Pinus.

Both gymnosperms and angiosperms bear seeds, then why are they classified separately?

Gymnosperms and angiosperms are seed-producing plants with diplontic life cycles.

In gymnosperms, the sporophylls are aggregated to form compact cones. The microsporophylls are broad and are not distinguished into filaments and anthers. The megasporophylls are woody and lack the ovary, style, and stigma, because of which the ovules lie exposed. The female gametophyte consists of archegonia. The fertilisation process involves the fusion of a male gamete with the female gamete. Their endosperm is haploid. The produced seeds are naked as there is no fruit formation.

Angiosperms are also known as flowering plants. They have sporophylls that aggregate to form flowers with the perianth. The microsporophylls consist of stamens containing pollen sacs. These sacs bear the male gametes called pollen grains. The megasporophylls are delicate and rolled, forming carpels that contain the ovary, style, and stigma. The ovules are present inside the ovary. The archegonium is replaced by an egg apparatus. Two male gametes enter the egg apparatus at the time of fertilisation. One male gamete fertilises the egg and the other fuses with the diploid secondary nucleus to form an endosperm. The resulting endosperm is thus triploid. In addition, in angiosperms, the development of seeds takes place inside the fruits.

What is heterospory? Briefly comment on its significance. Give two examples.

Heterospory is thus considered an important step in evolution as it is a precursor to the seed habit.

Heterospory evolved first in pteridophytes such as Selaginella and Salvinia.

(i) Protonema – It is the first stage in the life cycle of a moss, developing directly from the spore. It consists of creeping, green, branched, and often filamentous structures.

(ii) Antheridium – It is the male sex organ present in bryophytes and pteridophytes and is surrounded by a jacket of sterile cells. It encloses the sperm mother cells, which give rise to the male gametes.

(iv) Diplontic – It is the term used for the life cycles of seed-bearing plants (gymnosperms and angiosperms). In these plants, the diploid sporophyte is dominant, photosynthetic, and independent. The gametophyte is represented by a single-celled (or a few-celled) structure.

(v) Sporophyll – In pteridophytes, the sporophytic plant body bears sporangia. These sporangia are subtended by leaf-like appendages known as sporophylls. In gymnosperms, microsporophylls and megasporophylls are found. These bear microspores and megaspores respectively.

(vi) Isogamy – It is a type of sexual reproduction involving the fusion of morphologically-similar gametes. This means that the gametes are of the same size, but perform different functions. This type of reproduction is commonly observed in Spirogyra.

Differentiate between the following:-

(i) Red algae and brown algae

How would you distinguish monocots from dicots?

Monocots and dicots can be differentiated through their morphological and anatomical characteristics.

Match the followings (column I with column II)

Describe the important characteristics of gymnosperms.

1. The term gymnosperm refers to plants with naked seeds (gymnos – naked, sperma – seeds), i.e., the seeds of these plants are not enclosed in fruits.

2. The plant-body ranges from medium to tall trees and shrubs. The giant redwood tree Sequoia is one of the tallest trees in the world.

3. The root system consists of tap roots. The coralloid roots present in Cycas are associated with nitrogen-fixing cyanobacteria.

5. The leaves can be simple (as in Pinus)or compound (pinnate in Cycas). The leaves are needle-like, with a thick cuticle and sunken stomata. These help in preventing water loss.

6. Gymnosperms are heterosporous. They bear two kinds of spores – microspores and megaspores.

7. Flowers are absent. The microsporophylls and megasporophylls are arranged to form compact male and female cones.

8. Pollination occurs mostly through wind and pollen grains reach the pollen chamber of the ovule through the micropyle.

9. The male and female gametophytes are dependent on the sporophyte.