Tick the most suitable answer in question 1 and 2.

In addition to the rock particles, the soil contains

(i) air and water

In addition to the rock particles, the soil contains

(i) air and water

The water holding capacity is the highest in

(iv) mixture of sand and loam

The water holding capacity is the highest in

(iv) mixture of sand and loam

Explain how soil is formed.

Soil is formed through the process of weathering. Weathering is a process of physical breakdown and chemical decomposition of rocks and minerals near or at the surface of the earth. This physical and chemical decomposition is primarily done by wind, water, and climate. As a result of these processes, large rock pieces are converted into smaller pieces and eventually to soil.

How is clayey soil useful for crops?

Due to the very small size of the particles of clayey soil, particles are packed tightly and therefore can retain water. Clayey soil is also rich in organic matter. For growing crops such as wheat, gram, and paddy, the soil that is good at retaining water and rich in organic matter is suitable. Therefore, clayey soils having these characteristics are useful for such kind of crops.

List the differences between clayey soil and sandy soil.

Sketch the cross section of soil and label the various layers. 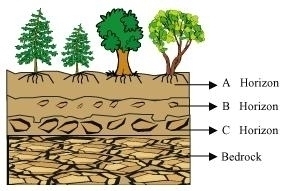 Solve the following crossword puzzle with the clues given: 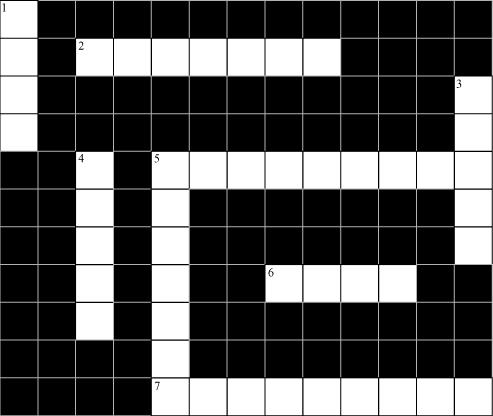 5. Use should be banned to avoid soil pollution.

7. Living organism in the soil.

1. In desert soil erosion occurs through.

4. This type of soil can hold very little water.

5. Collective name for layers of soil. 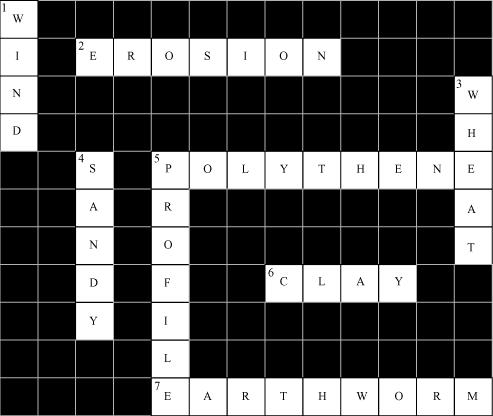 Explain how soil pollution and soil erosion could be prevented.

The persistent build-up of toxic compounds in the soil is defined as soil pollution. To prevent soil pollution, its causes must be controlled.

(i) Plastics and polythene bags destroy the fertility of soil. Hence, they should be disposed properly and if possible, their use should be avoided.

(ii) Some waste products from industries and homes pollute soil. These pollutants should be treated chemically to make them harmless before they are disposed.

(iii) Other pollutants of soil include pesticides and insecticides. Therefore, excessive use of these substances should be avoided.

Removal of the upper fertile layer of the soil (top soil) by strong wind and flowing water is known as soil erosion. Roots of plants bind the soil firmly and prevent soil erosion. Absence of plants leads to soil erosion. Therefore, soil erosion can be prevented by planting trees and checking indiscriminate cutting of trees.