(i) What are the three layers of the Earth?

(iv) How are extrusive and intrusive rocks formed?

(v) What do you mean by a rock cycle?

(vi) What are the uses of rocks?

(vii) What are metamorphic rocks?

(i) The three layers of the Earth are the crust, the mantle and the core.

(ii) A rock refers to any natural mass of mineral matter that makes up the Earth’s crust.

(iii) Igneous, sedimentary and metamorphic rocks are the three types of rocks.

(v)The transformation of one type of rock into another, under certain conditions and in a cyclical manner is referred to as the rock cycle. For example, igneous rocks, formed as a result of the solidification of molten magma, may break down into small particles, which may then be transported and deposited to form sedimentary rocks. Sedimentary and igneous rocks transform into metamorphic rocks when subjected to heat and pressure. These metamorphic rocks may themselves get broken down to form sedimentary rocks, or they may melt under great heat and pressure to form molten magma, which would then once again solidify to form igneous rocks.

(vi) Some of the uses of rocks are as follows:

(a) For building roads, houses and buildings

(b) For making jewellery

(c) For cutting and drilling purposes

(d) The fossilised remains of plants and animals present in rocks help in scientific research.

(e) The different minerals that make up different rocks are used as fuels, medicines, fertilisers, and in various industries.

(i) The rock which is made up of molten magma is

(ii) The innermost layer of the Earth is

(iii) Gold, petroleum and coal are examples of

(iv) Rocks which contain fossils are

(v) The thinnest layer of the Earth is

(i) The rock which is made up of molten magma is

(ii) The innermost layer of the Earth is

(iii) Gold, petroleum and coal are examples of

(iv) Rocks which contain fossils are

(v) The thinnest layer of the Earth is

(i) We cannot go to the centre of the Earth.

(iii) Limestone is changed into marble.

(i) The centre of the Earth, lying about 6000 km from the ocean floor, is characterised by extremely high temperature and pressure. There is only molten magma at Earth’s centre. Oxygen is absent from this region. Such conditions do not permit the survival of any living organism. Thus, we cannot go to the centre of the Earth.

(ii) When big rocks break down into small fragments (or sediments), the fragments are transported and deposited by factors like water and wind. The loose sediments compress and harden over the years to form layers and layers of rocks. These rocks are known as sedimentary rocks.

(iii) Limestone is an example of a sedimentary rock. When it is subjected to conditions of extreme heat and pressure, it gets converted into marble, which is a metamorphic rock.

(i) What are the minerals most commonly used in the following objects? 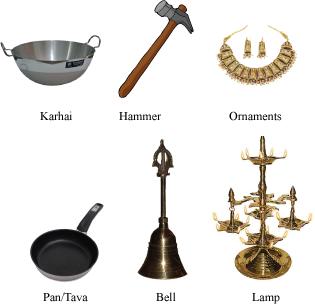 (ii) Identify some more objects made up of different minerals.