What is the term used for secretions of endocrine glands responsible for changes taking place in the body?

Hormones are chemical substances which are secreted by endocrine glands. They are responsible for changes taking place in the body.

Adolescence is the time period between the beginning of puberty and adulthood. During this period, the body undergoes several changes alongside reproductive maturity. It begins around the age of 11 and lasts till 18 or 19 years of age. The period of adolescence may vary from person to person.

What is menstruation? Explain.

Menstruation is the process of the shedding of the uterine lining on a regular monthly basis. It begins at puberty and is the reproductive cycle of the female body. Every month, the uterus prepares itself to receive a fertilized egg. Therefore, the inner lining of the uterus becomes thick and is supplied with blood to nourish the embryo. If the egg is not fertilized, then the lining of the uterus breaks down and gets released in the form of blood through the vagina. This lasts for about two to eight days. This cycle occurs every month and is known as the menstrual cycle.

List changes in the body that take place at puberty.

(i) Sudden increase in height and weight.

(ii) Broadening of shoulders and widening of chest in boys. In girls, the region below waist becomes wider.

(iii) In boys, under the influence of hormones, the larynx becomes prominent, the vocal cords become longer and thicker. These changes cause the voice to become hoarse.

(iv) Appearance of hair in areas such as underarms, face, hands, and legs.

(v) Appearance of acne as a result of excessive secretion of oil from skin.

Prepare a table having two columns depicting names of endocrine glands and hormones secreted by them.

What are sex hormones? Why are they named so? State their function.

Testosterone: This hormone brings about secondary sex characters in boys such as the growth of a beard, the voice becoming hoarse, development of reproductive organs, etc.

Oestrogen: This hormone is responsible for the development of secondary sexual characters in females such as the enlargement of breasts, development of female reproductive organs, etc.

(a) Adolescents should be careful about what they eat, because

(i) proper diet develops their brains.

(ii) proper diet is needed for the rapid growth taking place in their body.

(b) Reproductive age in women starts when their

(c) The right meal for adolescents consists of

(a) (ii) Adolescents should be careful about what they eat, because proper diet is needed for the rapid growth taking place in their body.

(b) (i) Reproductive age in women starts when their menstruation starts.

In human males, the larynx grows larger during puberty and can be seen as a protruding part of the throat. This protrusion is known as the Adam’s apple. In boys, under the influence of sex hormones, the larynx becomes prominent. As a result, the vocal cords become longer and thicker, causing the voice to become hoarse. However, in females, the larynx is of a small size and is hardly visible. Therefore, girls have a high pitched voice, while the voice of boys is low pitched.

(b) Secondary sexual characters are those features that help in distinguishing the male and the female body from each other. They are physical or behavioural characteristics that appear in humans at the time of puberty.

(i) Appearance of moustache and beard.

(iii) Growth of hair in genital area and other parts of the skin.

(i) Increase in breast size and darkening of the skin of nipples present at the tip of the breasts.

(ii) Growth of hair in genital area and other body parts.

The sex of a baby is determined by the type of male gamete that fuses with the female gamete.

All human beings have 23 pairs of chromosomes in their nuclei. Out of these 23 pairs, the last pair is known as the sex chromosome.

Thus, as the mother provides only X chromosome, the sex of the baby is determined by the type of male gamete (X or Y) that fuses with the X chromosome of the female.

Word game: Use the clues to work out the words.

3. Another term for teenage

7. Term for changes at adolescence 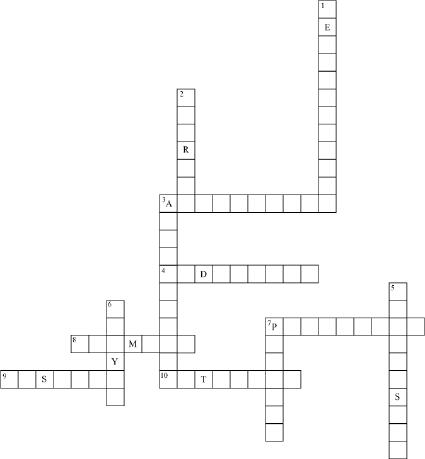 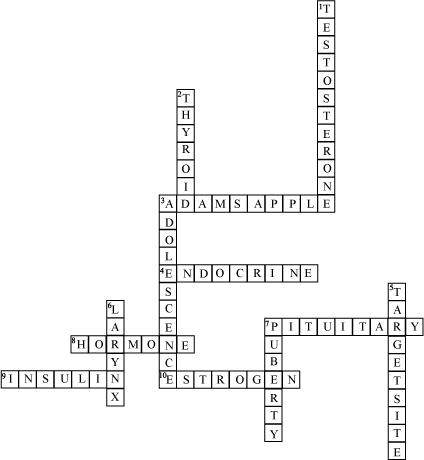 The table below shows the data on likely heights of boys and girls as they grow in age. Draw graphs showing height and age for both boys and girls on the same graph paper. What conclusions can be drawn from these graphs? 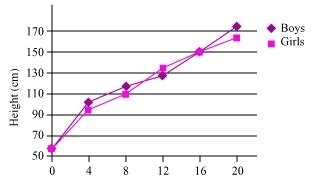 The graph depicts the relation between the age and height of both boys and girls. During puberty, there is a sudden increase in height of both boys and girls. On the basis of the above graph, it can be observed that during the age of 4-8 years, girls have less height as compared to boys. However, as soon as girls reach 12- 13 years, their height shows a sudden increase and becomes more than boys. In later years, growth in both sexes becomes stable. Growth during puberty is under the control of hormones.