Sound can travel through

(a) gases only (b) solids only

(d) Sound can travel through solids, liquids, and gases.

Sound requires a medium to travel through. Solid, liquid and gas provide the medium for sound. Hence, sound can travel through solids, liquids and gases.

Which of the following voices is likely to have minimum frequency?

(b) The number of oscillations per second of a vibrating object is called its time period. (T / F)

(c) If the amplitude of vibration is large, sound is feeble. (T / F)

(e) The lower the frequency of vibration, the higher is the pitch. (T / F)

The number of oscillations per second of a vibrating object is known as its frequency. Time period is the time required to complete one oscillation.

Humans cannot hear sounds of all frequencies. Humans can hear a sound whose frequency falls in the range of 20 Hz−20,000 Hz. The sound having frequency out of this range is inaudible to humans.

Unwanted or unpleasant sounds are known as noise. Sounds that are melodious and pleasing to ear are known as music.

Unwanted or unpleasant sounds are known as noise. If one is subjected to loud unpleasant sound continuously for a long time, then it may cause temporary hearing impairment.

Fill in the blanks with suitable words.

(a) Time taken by an object to complete one oscillation is called __time period__.

(b) Loudness is determined by the __amplitude__ of vibration.

(e) Shrillness of a sound is determined by the __frequency__ of vibration.

A pendulum oscillates 40 times in 4 seconds. Find its time period and frequency.

The time required to complete one oscillation is known as time period. It is given by the inverse of the frequency.

The sound from a mosquito is produced when it vibrates its wings at an average rate of 500 vibrations per second. What is the time period of the vibration?

The time required to complete one oscillation is known as time period. It is given by the inverse of the frequency.

Identify the part which vibrates to produce sound in the following instruments.

(a)Dholak is a musical instrument. It consists of a stretched membrane called its head. When the head is beaten gently, the stretched membrane sets into vibration. Since sound is produced when an object vibrates, the dholak produces a sound.

(b) Sitar is a musical instrument. It consists of stretched strings. When a string is plucked, it sets into vibration. Since sound is produced when an object vibrates, the sitar produces a sound.

(c) Fluteis a hollow pipe. When air is blown over its mouth, the air inside the pipe is set into vibration. As a result, a pleasant sound is produced.

What is the difference between noise and music? Can music become noise sometimes?

The sound that is pleasing to the ear is called music. For example, the sound produced by violins, pianos, flutes, pungs, etc.

The sound that is unpleasing to the ear is called noise.

Some examples of noise are as follows:

(i) Sound produced by horns of buses and trucks

(iii) Sound of a gun shot

Yes. Music can become noise when played at high volumes.

Some sources of noise pollution are as follows:

(i) Televisions and transistors running at high volumes

Explain in what way noise pollution is harmful to humans.

Noise pollution can lead to a number of health-related problems. Some of them are as follows:

Your parents are going to buy a house. They have been offered one on the roadside and another three lanes away from the roadside. Which house would you suggest your parents should buy? Explain your answer.

There will be more noise in the house which is along the roadside. This is because noise produced by transportation vehicles may cause trouble to the residents. The intensity of noise decreases with the distance between the source and the listener. Hence, it is better to take the house that is three lanes away from the roadside.

Sketch larynx and explain its function in your own words.

Larynx is a part of the throat. It is responsible for production of sound. A sketch of a human larynx is shown in the following figure. 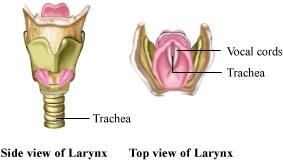 Larynx moves when we swallow something. Inside the larynx, there are two vocal cords. There is a small gap between them. This small gap allows air to pass through. When we speak, air is forced into this small gap by the lungs. This prompts vocal cords to vibrate. Since vibrating objects produce sound, sound is produced due to the vibration of vocal cords.

The speed of sound is less than the speed of light. Hence, light reaches us before the sound during a lightning, which is accompanied by thundering.