It can be observed that

∴ ΔOAB is an equilateral triangle.

Therefore, each interior angle of this triangle will be of 60°.

Therefore, angle subtended by this chord at a point on the major arc and the minor arc are 30° and 150° respectively.

Consider PR as a chord of the circle.

Take any point S on the major arc of the circle.

PQRS is a cyclic quadrilateral.

OP = OR (Radii of the same circle)

∴ ∠OPR = ∠ORP (Angles opposite to equal sides of a triangle) 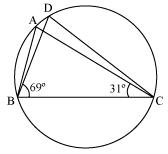 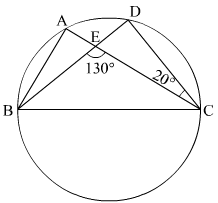 However, ∠BAC = ∠CDE (Angles in the same segment of a circle)

ABCD is a cyclic quadrilateral whose diagonals intersect at a point E. If ∠DBC = 70°, ∠BAC is 30°, find ∠BCD. Further, if AB = BC, find ∠ECD.

∴ ∠BCA = ∠CAB (Angles opposite to equal sides of a triangle)

If diagonals of a cyclic quadrilateral are diameters of the circle through the vertices of the quadrilateral, prove that it is a rectangle.

Let ABCD be a cyclic quadrilateral having diagonals BD and AC, intersecting each other at point O.

(Consider BD as a chord)

(Considering AC as a chord)

Each interior angle of a cyclic quadrilateral is of 90°. Hence, it is a rectangle.

If the non-parallel sides of a trapezium are equal, prove that it is cyclic.

Consider a trapezium ABCD with AB | |CD and BC = AD.

AM = BN (Perpendicular distance between two parallel lines is same)

∠BAD and ∠ADC are on the same side of transversal AD.

This equation shows that the opposite angles are supplementary.

Therefore, ABCD is a cyclic quadrilateral.

Two circles intersect at two points B and C. Through B, two line segments ABD and PBQ are drawn to intersect the circles at A, D and P, Q respectively (see the given figure). Prove that ∠ACP = ∠QCD.

ABD and PBQ are line segments intersecting at B.

If circles are drawn taking two sides of a triangle as diameters, prove that the point of intersection of these circles lie on the third side.

Two circles are drawn while taking AB and AC as the diameter.

Let they intersect each other at D and let D not lie on BC.

Therefore, BDC is a straight line and hence, our assumption was wrong.

Thus, Point D lies on third side BC of ΔABC.

However, it is given that

From equations (3) and (4), it can be observed that the sum of the measures of opposite angles of quadrilateral ABCD is 180°. Therefore, it is a cyclic quadrilateral. 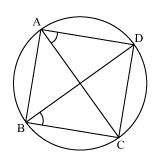 Prove that a cyclic parallelogram is a rectangle.

Let ABCD be a cyclic parallelogram.

We know that opposite angles of a parallelogram are equal.

Parallelogram ABCD has one of its interior angles as 90°. Therefore, it is a rectangle