ABC is a triangle. Locate a point in the interior of ΔABC which is equidistant from all the vertices of ΔABC.

Circumcentre of a triangle is always equidistant from all the vertices of that triangle. Circumcentre is the point where perpendicular bisectors of all the sides of the triangle meet together. 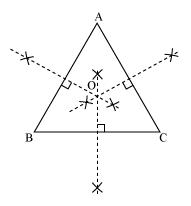 In ΔABC, we can find the circumcentre by drawing the perpendicular bisectors of sides AB, BC, and CA of this triangle. O is the point where these bisectors are meeting together. Therefore, O is the point which is equidistant from all the vertices of ΔABC.

In a triangle locate a point in its interior which is equidistant from all the sides of the triangle.

A: where there are different slides and swings for children,

B: near which a man-made lake is situated,

C: which is near to a large parking and exit.

Where should an ice-cream parlour be set up so that maximum number of persons can approach it?

(Hint: The parlor should be equidistant from A, B and C) 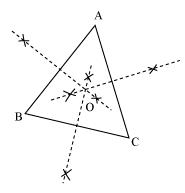 In this situation, maximum number of persons can approach it. We can find circumcentre O of this triangle by drawing perpendicular bisectors of the sides of this triangle.

Complete the hexagonal and star shaped rangolies (see the given figures) by filling them with as many equilateral triangles of side 1 cm as you can. Count the number of triangles in each case. Which has more triangles? 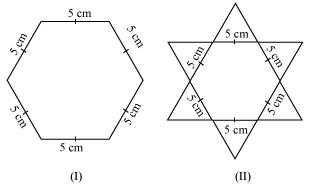 It can be observed that hexagonal-shaped rangoli has 6 equilateral triangles in it.

Star-shaped rangoli has 12 equilateral triangles of side 5 cm in it.

Therefore, star-shaped rangoli has more equilateral triangles in it.