(a) The art form which observed carefully and tried to capture exactly what the eye saw is called ___________.

(b) The style of painting which showed Indian landscape as a quaint, unexplored land is called __________.

(c) Paintings which showed the social lives of Europeans in India are called _________.

(d) Paintings which depicted scenes from British imperial history and their victories are called ____________.

(a) The art form which observed carefully and tried to capture exactly what the eye saw is called portraiture.

(b) The style of painting which showed Indian landscape as a quaint, unexplored land is called picturesque.

(c) Paintings which showed the social lives of Europeans in India are called Kalighat paintings.

(d) Paintings which depicted scenes from British imperial history and their victories are called history paintings.

In what way did the British history paintings in India reflect the attitudes of imperial conquerors?

Why do you think some artists wanted to develop a national style of art?

Many painters, towards the end of nineteenth century, wanted to establish a stronger connection between art and nationalism. To do so, they tried to develop a style of art that could be considered both modern and Indian. This attempt to create a national style of art can be seen in the works produced by Raja Ravi Varma. He used the Western art of oil painting and realistic life study to portray scene after scene from the Indian mythology. However, there never was a clear consensus as to what defined an authentic Indian style of art. Nationalist artists like Abanindranath Tagore rejected the art of Ravi Varma and felt that a genuine Indian style of painting needed to draw inspiration from non-Western art traditions, and try to capture the spiritual essence of the East. So, they turned to medieval Indian traditions of miniature painting and the ancient Indian art of mural painting. They were also influenced by the Japanese art tradition.

There were others who felt that an authentic Indian style of art would be one which explored the real life instead of illustrating ancient books; one which looked for inspiration from living folk art and tribal designs rather than ancient art forms. Ultimately, what all these artists aimed at representing was a certain national consciousness with which each Indian could relate.

Why did some artists produce cheap popular prints? What influence would such prints have had on the minds of people who looked at them?

By the late nineteenth century, mechanical printing presses were set up in different parts of India. This allowed prints to be produced in large numbers. These prints could therefore be sold cheap in the market. As a result, even the poor could buy them. With the spread of nationalism, the popular prints of the early twentieth century began carrying nationalist messages. Such popular prints would have inspired people to fight British rule.

Point out which of the following were brought in with British art:

Oil painting, life-size portrait painting and the use of perspective

Describe in your own words one painting from this chapter which suggests that the British were more powerful than Indians. How does the artist depict this?

The history paintings dramatise and recreate various episodes of British imperial history. These paintings celebrated the British—their power, victories and supremacy. One such painting is the one shown below. 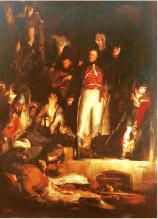 The discovery of the body of Sultan Tipu by General Sir David Baird, 4 May 1799, painted by David Wilkie

This painting, like most imperial history paintings, aims to project the superiority of the Britishers over the Indians. On the face of it, the painting relates to an episode from the annals of history—the defeat and death of the ruler of Mysore, Tipu Sultan. But this historical episode has been re-created and re-presented in a manner that serves to further the glory of the colonial masters. The artist makes use of several strategies to do so.

The first thing to note is that we are shown a dead and defeated Tipu Sultan. He lies in some sort of a ditch with other dead men. In contrast, we see the standing and victorious David Baird. So, quite simply put, what we are presented with is the triumph and victory of the imperialist forces and the defeat of all its enemies. In the war between the Indians and the British, the British will always be “the last ones standing”.

David Baird stands on an elevated platform while Tipu lies literally at his feet. The royal clothes of Tipu are torn; he is without armour or weapons. This is a way of saying that the land, which had so far been protected by Tipu and others such as Tipu, is lying defenceless, at the mercy of the British.

His tattered condition also signifies a lost regality. He is now no more the king of Mysore. On the other hand, there is David Baird in his formidable attire, signifying that Britain is the new ruler of Mysore, and not only of Mysore but also of the entire land known as India. This is sort of reinforced by David Baird’s forefinger, which points in an undefined, general direction. Through the pointing of his forefinger, David Baird seems to say, “There is still a lot to conquer and subdue”. Already, by pointing away from the moment at hand, Baird shows that Tipu Sultan is part of the past. The future beckons the British. Tipu Sultan lying in semi-darkness and David Baird being lit up by the lantern are also strategies that seem to suggest the invincibility and all-powerful nature of the coloniser. Tipu is the setting sun while the East India Company (through the figure of David Baird) is the rising sun. In fact, at one time, the colonisers believed that the sun never set on the British Empire.

The play with light and shade tends to highlight only one aspect of the battle, i.e., the victory of the imperial forces. The tragedy that accompanied this victory is relegated to the darkness. So, the artist’s attempt is to present a triumph and glory in its unmitigated form.

Why did the scroll painters and potters come to Kalighat? Why did they begin to paint new themes?

Around the early nineteenth century, local village scroll painters and potters moved to Kalighat. It was a time when the city of Calcutta was expanding as a commercial and administrative centre. Colonial offices were coming up, new buildings and roads were being built, markets were being established. The city appeared as the place of opportunity where people could come to make a new living. These village artists too came and settled in the city in the hope of new patrons and new buyers of their art.

After the 1840s, there was a shift in what the Kalighat artists produced—from paintings related to mythology and religion, they began to produce paintings on social and political themes. In these paintings, they depicted the social life under British rule. This change was the result of living in a society where values, tastes, social norms and customs were undergoing rapid changes. Their paintings were their ways of responding to the world around them. For example, Kalighat paintings of this period often ridiculed the westernised baboo, criticised the corrupt priests and expressed the anger of the common people against the rich.

Why can we think of Raja Ravi Varma’s paintings as national?

Raja Ravi Varma was one of the first artists who tried to create a style that was both modern and national. He used the Western art of oil painting and realistic life study to paint themes from Indian mythology. He dramatised on canvas scene after scene from the Indian epics Ramayana and Mahabharata. This portrayal of an Indian consciousness is what makes his paintings national. This was perhaps one of the reasons why his paintings were popular not only among Indian princes and art collectors but also among the masses.