You read that one of the main functions of the judiciary is ‘upholding the law and Enforcing Fundamental Rights’. Why do you think an independent judiciary is necessary to carry out this important function?

It is necessary to have an independent judiciary to carry out the basic function of “upholding the law and enforcing Fundamental Rights” because the judiciary plays a crucial role in the functioning of India’s democracy. It can function in this capacity only if it is independent of pressure from the legislature and the executive. This ensures two important things: one, the separation of powers between the judiciary, legislature and the executive can be maintained smoothly; two, any citizen can approach the courts of law if his/her Fundamental Rights are violated, without fear of disputes being solved in favour of those in power.

Re-read the list of Fundamental Rights provided in chapter 1. How do you think the Right to Constitutional Remedies connects to the idea of judicial review?

In the Following illustration, fill in each tier with the judgments given by the various courts in the Sudha Goel case. Check your responses with others in class. 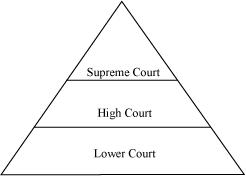 Supreme Court: Laxman, Shakuntala were given life imprisonment while Subhash Chandra was acquitted for lack of sufficient evidence.

Keeping the Sudha Goel case in mind, tick the sentences that are true and correct the ones that are false.

(a) The accused took the case to the High Court because they were unhappy with the decision of the Trial Court.

(b) They went to the High Court after the supreme Court had given its decision.

(c) If they do not like the Supreme Court verdict, the accused can go back again to the Trial Court.

(b) They went to the High Court after the Trial Court had given its decision.

Why do you think the introduction of Public interest Litigation (PIL) in the 1980s is a significant step in ensuring access to justice for all?

The introduction of Public Interest Litigation (PIL) in the 1980s is a significant step in ensuring access to justice for all because it also keeps in mind the interests of the illiterate and poor who are not educated enough or cannot afford to access the Indian legal system for justice against exploitation or violation of their basic human and Fundamental Rights.

Re-read excerpts from the judgment on the Olga Tellis vs Bombay Municipal Corporation case. Now write in your own words what the judges meant when they said that the Right to Livelihood was part of the Right to Life.

Write a story around the theme, ‘Justice delayed is justice denied’.

Make sentences with each of the glossary words given on the next page.

(a) Acquit – The strong case in favour of Ravi led the High Court to acquit him of all charges of guilt that the Trial Court had levied on him.

(b) To appeal – The women’s organization lent strong support to the domestic maid to appeal against charges of theft that her employer had accused her of.

(c) Compensation – The state government paid compensation to the victims’ families after an unfortunate train accident that killed hundreds.

(d) Eviction – The company’s claims to land occupied by slum-dwellers led to the poor people’s eviction from their homes, which were bull-dozed by municipal authorities.

(e) Violation- The judiciary takes stringent action against any violation of Fundamental Rights.

The following is a poster made by the Right to Food Campaign.

Read this poster and list the duties of the government to uphold the Right to Food.

How does the phrase “hungry stomachs, overflowing godowns! We will not accept it!!” used in the poster relate to the photo essay on the Right to food on page 61? 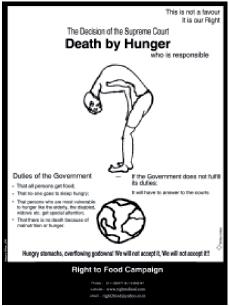 The duties of the government to uphold the Right to Food include providing for the poor who cannot afford basic meals; taking care of the elderly, widows, disabled and children who might not be able to earn a livelihood; and, ensuring that no one dies due to malnutrition or hunger.

The phrase “Hungry stomachs, overflowing godowns! We will not accept it !!” relates to the photo essay on the Right to Food (on page 61) because it highlights the droughts in Rajasthan and Orissa in 2001 when millions faced acute shortage of food even though government godowns were overflowing with grain which was being eaten away by rats. The People’s Union of Civil Liberties filed a PIL in the Supreme Court against the guilty state governments who were then directed to provide more employment, food at cheaper rates and mid-day meals for children. In this sad situation of “hunger amidst plenty”, the filed PIL helped bring relief to many.