Question 1:
If on a round trip you travel 6 km and then arrive back home, calculate your displacement after completing the trip.
Answer:
Displacement is zero.

Question 3:
(i) What is the similarity in the electronic structure of the following set of atoms :
(a) Lithium
(b)Sodium
(c) Potassium
(ii) Which of the above elements is most reactive and why ?
Answer:
(i) Electronic configuration of the elements are given as under:

Question 4:
What are Phanerogams ? Point out differences between its two groups. Ans. Phanerogams are flowering plants. Its two groups are Gymnosperms and Angiosperms:
Answer:

Question 5:
Why are antibiotics effective against bacteria but not against viruses ?
Answer:
Antibiotics act by preventing one of the bio-chemical events towards formation of a new pathogen cell. Thus, most antibiotics prevent cell wall formation, which happens in bacterial cell only, thereby preventing bacterial diseases.

Question 6:
(a) Write four phenomena which were successfully explained using universal law of gravitation.
(b) The gravitational force between two objects is 100 N. How should the distance between the objects be changed so that force between them becomes 50 N ?
Answer:
(a) The universal law of gravitation successfully explained several phenomena. Some such phenomena are:
(i) the force which binds us to the earth
(ii) motion of moon around the earth
(iii) motion of planets around the sun
(iv) occurrence of sea tides due to attraction of moon and of sun.
(b) Let distance between the two objects be changed from r to r’ so that gravitational force between them changes from F = 100 N to F’ = 50 N.
Then as per inverse square law, we have

Question 7:
Give reason for the following :
(a) The sound of a thunder is heard a little later than the flash of light is seen,
(b) The ceilings of the concert hall are curved.
(c) Some animals get disturbed before the earthquakes.
Answer:
(a) In lightning process, flash and thunder are produced simultaneously. Flash is seen almost immediately because speed of light is extraordinarily large (c = 3 × 108 m s-1). But thunder is heard a few seconds later because speed of sound is much less (about 346 m s-1 at 25 °C) and requires time to cover up the distance from the site of thunder in sky to us.
(b) The ceilings of concert halls and conference halls are generally curved as shown in figure. It is done to ensure that the sound after reflection from the ceilings reaches all corners of the hall.
(c) Before earthquakes generally infrasonic shock waves are produced. Some animals, who are sensitive to infrasonic waves, get disturbed due to them.

State three points of difference between anion and cation.
Answer:

Question 11:
An element X forms the following compounds with hydrogen, carbon and phosphorous : P2X3, P2X5, H2X2, H2X, CX2, CX. Find the valencies of X and other element present in the compound.
Answer: 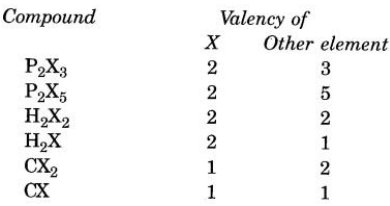 Question 12:
(a) How are CFCs harmful for the environment and living beings ?
(b) Mention any two human activities which would lead to an increase in the carbon dioxide content of air.
Answer:
(a) CFCs result in damaging the ozone layer. Depletion of ozone layer in upper atmosphere of earth results in more UV radiations reaching the earth’s atmosphere. This results in global warming.
More UV radiations indicate more high energy radiations that can mutate our DNA. This has resulted in increased number of skin cancer.
(b) CO2 content can increase due to :
(i) burning of fossil fuel.
(ii) burning of dead leaves and other plant material.

Question 13:
(i) Write the definition of health as given by WHO.
(ii) List two factors that affect health.
Answer:
(i) According to WHO, health is a state of complete physical, mental and social well being, and not merely an absence of disease or infirmity.
(ii) Factors that affect health are –
(a) Clean physical environment – as it would result in pathogen-free environment.
(b) Malnourishment leads to inability to fight diseases or results in deficiency diseases.

Explain the basis of Principle of Treatment for any disease.
Answer:
There are two ways to treat an infectious disease. They are as follows :
(i) Reduce the effect of disease : The principle involved is that the effect of disease is lessened without killing the infectious agent which is done either by taking medicines and antibiotics as well as taking appropriate rest so that the body heals.
(ii) Kill the microorganisms of infectious agents : The infectious agents like bacteria, viruses, fungi, helminths and protozoan’s have some essential biochemical life processes which are peculiar to this group. These processes may be pathways for respiration or synthesis of new substances. Drugs are available which block these processes and kill the infectious agents. Antibiotics are chemicals produced by microbes which kill or prevent the growth of other microbe by blocking life processes without harming human cells.

Question 15:
Ravi is a poor labourer. For last few days he used to feel pain in his lower abdomen as well as in his back. When he went to a doctor, the doctor prescribed some clinical tests as well as ultrasonography of lower abdomen. When Rita, who lived nearby came to know of this, she decided to give financial help to Ravi. After tests and ultrasonography it was found that there was a stone in the left kidney of Ravi. Rita asked her neighbours to contribute for the operation. All the neighbours contributed for the operation as well as subsequent medical expenses. Now Ravi is absolutely fit.
(i) What is ultrasound ? Explain its working principle.
(ii) What values are shown by Rita and her neighbours ?
Answer:
(i) Ultrasound is a diagnostic technique, used to get images of internal organs. It is based on the principle called piezoelectric (pressure electricity) effect. The transducer probe is the main part of the ultrasound machine which makes sound waves and receives reflected echoes from the patient’s tissues.
(ii) Values shown by Rita and her neighbours are :
(a) Comradaric
(b) Concern
(c) Generosity
(d) Compassion.

Question 16:
(a) How would you arrive at a mathematical formula to measure force using second law of motion ? Define the unit of force using this formula.
(b) A bullet of mass 10 g travelling horizontally with a velocity of 150 ms-1 strikes a stationary wooden block and comes to rest in 0.03 s. Calculate the distance of penetration of the bullet into the block. Also, calculate the magnitude of the force exerted by the wooden block on the bullet.
Answer:
(a) Newton’s second law of motion states that the rate of change of momentum of an object is directly proportional to the external unbalanced force applied on it and takes place in the direction of applied force.
Let an object of mass m was initially moving with a velocity u. It means that its initial
momentum
p1 = mu.
If on applying a constant force F for time t the velocity of the object changes to v then final momentum of given object p2 = mv.
Change in momentum = P2 – P1 = mv – mu = m(v – u)
Rate of change of momentum =

= acceleration of the given object
According to statement of second law of motion, the rate of change of momentum is directly proportional to the applied force. Hence, we have
F ∝

or F ∝ ma
F = kma, where k is a constant of proportionality.
Generally the units of force are so selected that if m = 1 and a = 1, then force F = 1. In such a case value of constant k becomes 1 and the relation becomes :
F = ma
The SI unit of force is a newton (1 N), which is the force which produces an acceleration of 1 m s-2 when applied on an object of mass 1 kg.

(a) Define potential energy of an object. Give an expression for gravitational potential energy.
(b) A car of mass 2000 kg is lifted up a distance of 30 m by a crane in 2 minutes. What is the power supplied by the crane ? (g = 9.8 m s-2)
Answer:
(a) The potential energy of an object is the energy present in it by virtue of its position or configuration or change thereoff.
If an object of mass m is situated at a height h from a reference ground level, then its gravitational potential energy is
Ep = mgh
(b) Here mass of car m = 2000 kg, vertical distance covered by car s = h = 30 m and time t = 2
minutes = 2 x 60 s = 120 s
∴ Total work done by crane W = mgh
∴ Power supplied by the crane t =

Question 18:
Wet clothes dry up similarly when we spill water on the floor it dries up after sometime. In both the cdses change of state from liquid to vapour takes place without reaching the boiling point.
(i) What is this phenomenon called ?
(ii) Explain how the change occurs at temperatures lower than the boiling point.
(iii) Mention three factors which determine the rate at which the change of state from water to vapours occurs at room temperature.
Answer:
(i) This phenomenon is called evaporation.
(ii) Molecules of water which are moving at speed higher than the average speed leave the surface and go into the atmosphere. This is how evaporation takes place.
(iii) Factors that determine the rate of evaporation :
(a) Surface Area – Greater the surface area, greater will be the rate of evaporation.
(b) Temperature – Higher the temperature, greater will be the rate of evaporation. 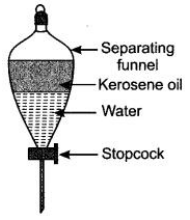 Question 20:
The immune system of Hari is damaged by the attack of pathogen on his body.
(i) Name the disease he is suffering from.
(ii) Name the pathogen that has attacked his body.
(iii) Mention any three modes of transmission of this disease.
Answer:
(i) Hari is suffering from AIDS – Acquired Immuno – Deficiency Syndrome.
(ii) The pathogen that has caused AIDS is HIV – Human Immuno Deficiency Virus.
(iii) This virus is transmitted through following ways :
(a) Sexual contact with an infected person carrying AIDS virus.
(b) Transfusion of blood infected with HIV.
(c) Use of unsterilized needles, blades or razors.
(d) Transplacental transmission i.e., AIDS infected mother to the foetus developing in her womb.

Question 21:
Answer the following –
(i) Draw a labelled diagram of smooth muscle.
(ii) Differentiate between parenchyma and sclerenchyma.
(iii) Name the epithelium which has hair-like projection on outer surface of the cells.
(iv) Name a tissue that stores fat in the body.
Answer:
(i)

(ii) Distinction between parenchyma and sclerenchyma on the basis of their cells wall:

Question 25:
A horse magnet was moved over a mixture of iron filings and sulphur as shown in the figure.
(a) Tell whether the mixture of the two substances is homogeneous or heterogeneous.
(b) Which substance will be left on the watch glass after the experiment ?

Answer:
(a) The mixture of iron filings and sulphur is heterogeneous.
(b) Sulphur will be left on the watch glass after the experiment.

Question 27:
Name two features which you would examine to categorise a plant into dicot or monocot.
Answer:
(i) Leaf : Are broad, with reticulate venation in dicots, and blade-like with parallel venation in monocots.
(ii) Flower: Flowers are pentamerous in dicots and trimerous in monocots.